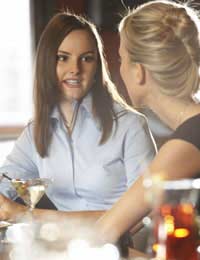 Life coaching was almost unheard of in the United Kingdom a decade ago but is now commonplace although our reticence to talk about such things openly means there's probably more people using them than we think. Mentors too, are popular, although this term is usually used to refer to coaching in the business or education world than in our private lives. Both of these offer essentially the same service, a listening ear that we can use to try and help us find our way through business and life, something that many people find increasingly difficult in modern times.

The idea of a mentor is someone who is more experienced and probably, but not necessarily, older than the person they are helping. In education, it might be a student who is a year or two ahead of the entry age and helps new students to get to grips with the mechanics of life in a new school or college. They would simply be a point of reference, being asked simple questions such as: "who do I see about this?"

In business the mentor can be someone in the same company, who is more senior but not the person's manager (to retain some independence), who can help a less senior person progress through the company. The idea is that junior managers can learn from the experience (and mistakes!) of the more senior mentor and the company as a whole benefits twice from the senior person's experiences. It is also a good morale booster for staff as both the mentor and the mentee (the person being mentored) are likely to feel more valued, which can help to reduce staff turnover.

A mentor in business can also be an independently hired person, something that is particularly the case with senior executives. The problem at that level of business is that executives can't always talk to their direct reports or peers about problems, or their ideas, because they are all likely to have their own agenda, either covert or overt, which stops them from being an independent sounding board, even if they wanted to be. So employing a consultant as a mentor, or executive coach, can give a senior executive someone who can give an honest and unbiased opinion on whatever the executive is thinking of doing, as they won't have any stake in the outcome.

A mentor in this situation must be someone who has had senior management experience themselves, as they will be required to understand the issues and their implications. They may also be asked to give opinions, although mentors and coaches should try not to respond to this, using questioning techniques to elicit the answers from the mentee instead.

Life coaches, on the other hand, perform similar tasks in a similar way, but focussing on an individual's private life and what they want to get out of it. They will encourage people to come out with their goals, teasing and prodding gently to get the client to say out loud the things that are in their minds but they don't often know they're there. A life coach will encourage coachees to write down their goals and will then move towards a more project management type of role, helping them decide what steps they should take to work toward their goals and checking them on their achievements as they go.

People turn to life coaches for many different reasons and at different points in their lives. It might be that they just feel that life is plodding along and they're no longer sure why their doing what they're doing, or perhaps they are dissatisfied with their career and want to try something different, but are unsure what that should be. It could be that they've suffered a bereavement or have retired, and aren't sure how to adapt to the changes. As with mentoring, the idea is not to sit in judgement, or have an opinion, but to be someone to listen and help elicit answers from within the person being coached.

The dividing line between coaching and mentoring is blurred, and as these disciplines have only emerged recently, the terms are often used interchangeably. One word of warning to anyone who is considering using a coach or a mentor, is that there are no definitive recognised qualifications for either. There are some courses that last only for a weekend, and others that are a fortnight or more which have constant help and support for qualified people for years after they have taken the course. It is imperative to find out what training a candidate has gone though and speak to former clients of theirs before making a choice.

Finding Good IT Support For Your Home Computer