Home > Inside the Home > Hiring Plumbers and Electricians 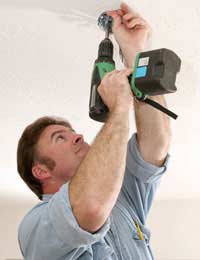 Both electricians and plumbers are in hot demand. Not only are a lot of the things that they do too difficult for the majority of DIY enthusiasts but they are now regulated so that a lot of the work can't be done by anyone other than a qualified and registered person. This applies to electrical work more than plumbing but even then, any work with gas supplies has to be done by a fitter registered with CORGI (the Council for Registered Gas Installers), the government body responsible for gas safety.

Locating the Service You Need

Finding and keeping good plumbers and electricians can be a nightmare, and personal recommendation is by far the best way to find someone. Often this just isn’t possible, for example if your central heating's not working on a freezing night then let's face it, you're going to get the first plumber you can find by ringing round all of the local ones in the telephone directory until you get an answer.

There are also quite a few centralised emergency (but commercial) plumbing services listed in Yellow Pages who will send messages out to plumbers in your area, and this might be a better way to get a response when the need is urgent. The same services exist for electricians too, in fact it's sometimes the same company that deals with both types of emergency, among others such as locksmiths. There are fewer for electricians though.

If it's not an emergency callout but some planned work that you're considering having done, then the usual rules apply as with any other trade or profession that you're considering using. Get at least three quotes, check out the trade associations and certifications that they say they have, and make sure they are properly qualified. It's worthwhile doing a bit of preparation yourself as well, make sure you know what it is you want doing and what parts of the job there are, if any, where you'll be looking to the contractors to tell you the options so that you can make a choice.

When you invite them to your home to give the estimate, ask them questions about other jobs that they've done that are similar to yours and ask them for the details of previous customers that you can speak to. If they are reluctant to do this then steer well away from them.

One thing to watch for, with both plumbers and electricians, is that a number of training organisations have sprung up, and some franchise operations, which lure people into spending a lot of money with them to gain qualifications and make lots of money. But many of these companies are not giving full training and are not qualified to carry out the certification and the end result is a lot of disgruntled but unqualified people trying to make a living having been duped.

These organisations are working within the letter of the law however, so it is difficult to take action against them. If you think that your work has not been done correctly or you suspect that a tradesman is not telling the truth about their qualifications, then get on to the local trading standards authority straight away. Your safety must come first.